This article describes a camera system which I used to automatically photograph the Total Solar Eclipses of 1999 August 11 (from the small French village of St. Marie, some 50kms north-east of Rheims) and 2001 June 21 (from the upper Zambezi river in Zambia). I hope it may be of use to others who are developing their own system. Prior to the eclipse, I tested the system on both the Moon and Sun, with the camera attached to a Celestron C90.

There are three elements to the system:

The Canon T70 camera is available at a reasonable price (around £80 secondhand in the UK, body only) and has the advantages of a built-in motor-winder, electronic shutter release and push-button shutter speed buttons. Unlike Schneider and Evans (see references), I did not mind dismantling my camera in order to modify it! With the top camera housing removed, the shutter speed buttons are revealed. I sacrificed the flash hot-shoe connector and moved two wires from hot-shoe contacts to the shutter speed buttons. By momentarily connecting the appropriate flash contacts, the shutter speed changes up and down. I obtained a secondhand flashgun, removed the base and connected three wires back to two of the RS232/IO converter relays, (one wire is a common return). The Canon Remote Switch 60T3 is expensive for a cable release, but the connector on the Canon doesn't seem to be 'standard'. I added a socket to the switch and a further cable connects to a third relay on the converter box. Using three 'bits' I can now control shutter speed up/down and shutter 'fire'. I have a further four bits available which may be used to control a second SLR camera and a video camera. 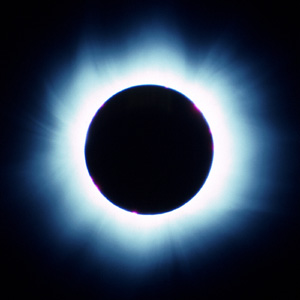 For the eclipse I used one T70, modified as above, attached to a Celeston C90 1000mm f/11 telescope - camera 1. A second T70, unmodified, was attached to a Sirius 500mm f/8.8 catadioptric lens - camera 2. Camera 1 was loaded with Kodachrome 64 transparency film: my usual 'eclipse' film. Camera 2 was loaded with Kodak Royal Gold 100 print film. Prior to 1st contact, the internal clock on the Psion 3a was set to UTC from a Garmin GPS 12XL via the serial interface. French maps are good enough to accurately measure longitude and latitude, the GPS unit reassuringly confirmed this.

Camera 1 was fired for three sequences during totality: the first run was from just before 2nd contact to capture Baily's Beads, to 15 seconds after, for recording the chromosphere and prominences. Exposure times ranged from 1/1000 - 1/60 second. During the middle part of the eclipse a sequence of exposures lasting from 1/250 - 4 seconds was taken to capture the inner and middle corona. The third run was around 3rd contact to once again capture prominences, the chromosphere and Baily's Beads.

Camera 2 was fired for two periods: between camera 1's first and second run, and between the second and third run. Exposure times ranged from 1/8 - 8 seconds. The shutter speed was controlled simply by setting the camera on 'B', with the Psion 'holding' the shutter open for the required length of time.

By alternating the periods of camera firing I avoided any problems due to shutter vibration from one camera affecting the other. There was some insurance against passing cloud in that for most of totality one or other camera was taking pictures. In fact totality turned out to be cloudless!. Both cameras worked faultlessly, and camera 1 appeared to change its shutter speed as expected. Please have a look at my photographs from the 1999 Eclipse.

I will probably go on to modify my second T70 in the same way as the first was modified, giving me a full control of shutter speeds on both cameras.

Once again, the system worked flawlessly, this time after being bumped hundereds of kilometres over Zambian roads. Essentially I repeated what I did in 1999. The only differences were that I had obtained a Tamron SP 500mm f/8 catadioptric lens for use on the second camera, and I was totally dependent on the GPS unit to measure my position. Once again, the system worked flawlessly, my photographs capturing 2nd contact, mid-eclipse and 3rd contact, testament to the work of Jean Meeus and Fred Espenak in enabling such accurate predictions to be generated so easily. My report of the eclipse together with photographs is here.

For this eclipse, observed from Panama, I ported the software to a Psion 5mx and took advantage of the some of the extra features available in OPL32. The software to calculate the local circumstances, now reads the position of the observation site from a Garmin 16 GPS unit. As the Psion has only one serial port, I have to unplug the GPS prior to using the camera converter. This time I used a Pentax MZ7 camera body, but as I have not yet modified it to allow external control of the shutter speeds, the exposure was the same for all shots taken during this brief eclipse. There is less 'mirror-slap' in the MZ7 compared to the T70, and the motor speed is up to 2 fps. Here is my report of this eclipse.

Glenn Schneider has an extensive article about his system based on a Macintosh, at http://nicmosis.as.arizona.edu:8000/ECLIPSE_WEB/UMBRAPHILE/UMBRAPHILE.html.

Nigel Evans uses Schneider's solenoid system, but controlled from a Psion 3c Palmtop. His article 'The Automation of Solar Eclipse Photography' appears in the Journal of the British Astronomical Association, 1999 April, vol.109 number 2.

Dr Wolfgang Strickling has built a system that takes photographs and makes weather observations using a Psion II Organiser. Details of his system (in German) can be found at http://home.t-online.de/home/Dr.Strickling/sofi_org.htm.

Canon T70 cameras are very popular amongst Meteor photographers, "The Canon T70-50mm project" by Robert Haas at http://www.delpsurf.cistron.nl/haas_array.html, shows how to control many cameras from one 'master' fitted with the command back.

My thanks to Nigel and Glenn for inspiration. Please get in touch if you have any questions or suggestions.

I used this system to photograph the Leonid Metor shower in 1999 November. The hardware was exactly as described, but I wrote a new version of the software. The 'Meteor' software automatically takes a specific number of (typically) 5 minute exposures, consecutively. The high activity of the Leonids enabled me to catch several meteor trails, including this one which shows both a Leonid and a Taurid passing through Lepus.