On 1998 August 26/27 an 11th magnitude star was occulted by Uranus. This proved to be an extremely difficult observation due to the widely differing magnitudes of the two objects. The mpeg movie shows 10 CCD frames obtained between 22:00hrs and 00:30hrs. The camera was placed at the prime-focus of a Meade 10inch LX200. A Wratten 87 Infra-Red filter was used to try and reduce the light from Uranus in relation to the star. Only about 1 magnitude was gained by this method. Sky conditions were not good for the early part of the event, and by the time of occultation Uranus was at a low altitude in the south-western sky. In the movie, variations in brightness are caused by sky conditions rather than any other occultation effects. Eyepiece projection should have been used to get a longer EFL and so increase the image scale and hence separation between the star and planet. Possibly a deeper infra-red filter may have further reduced the difference in brightness between the two objects.

Image of Neptune taken with CCD camera at prime-focus of LX200.

Images of Pluto obtained a day apart using the CCD camera at the prime-focus of a Celestron C8 telescope. In the second image, Pluto was very close to a brighter star, whose light swamped the planet. The first image shows the trail of a geostationary satellite passing through the field of view during the exposure. 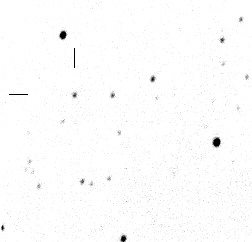