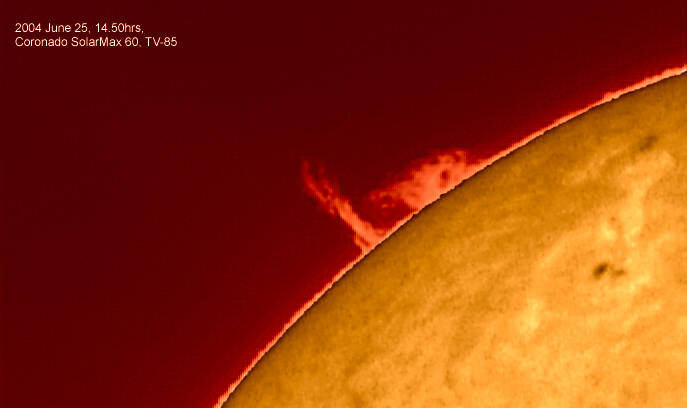 I use Starlight Xpress SXV-H9 and MX916 CCD cameras to image many different astronomical subjects, including the Outer Planets. Previously I built a Cookbook CCD camera. My Minor Planets page has a short movie of 1998 WT24. Like many others, I too obtained an image of the Gamma-ray burster GRB021004.

Latest observations and images can be found here, (ISS and Venus Occultation, 2008 December 1)

On 2010 July 11 I watched the total eclipse of the Sun from French Polynesia, while my camera automatically recorded the event for me. There are some photographs here and details of my system are here. Previously, I went to see the 2010 Annular from Uganda and the total eclipse of 2009 from the Pacific Ocean.

Here is a short article on my visit to Star City in Russia.

Light pollution can be reduced! Join the fight, see the CPRE and BAA CFDS websites.

The South Downs were proposed for National Park status in 1947. Despite opposition from West Sussex County Council and several of the district councils, they gained that important designation on 2009 March 31 - South Downs National Park.

The great hills of the South Country
They stand along the sea,
And it's there, walking in the high woods,
That I would wish to be,
And the men that were boys when I was a boy
Walking along with me.

- second verse from 'The South Country' by Hilaire Belloc.

The Brighton-based Indie rock band British Sea Power have recorded a song with the intriguing title 'Lights Out For Darker Skies': is it an anti-light pollution song? Well, maybe, as the song's writer Yan explains in this article that appeared in The Independent. The lyrics are here and the song can be heard here. An eclectic band with songs influenced by their love of history, science and 'the outdoors'. Give them a listen.

I currently belong to ...
British DX Club,
and the British Astronomical Association.

If you are interested in Artificial Earth Satellites, check out the Visual Satellite Observers' Home Page. Geostationary satellites may be seen quite easily with a telescope; I have imaged them with my CCD camera, here are several examples.

The software package Dance of the Planets is an excellent Solar System simulator, but it stopped working when I upgraded my PC to a Pentium II. Here are the details of the 'patch' required to get this program working again.

If you need to hire a camera lens for a special event (e.g. eclipse or safari) I recommend Lenses For Hire.